If you want to hear some in-depth discussion from masters of the game regarding these new spoilers, click Play below to hear a bunch of old men kvetch about the good old days. If you want to read ill-conceived novels about inane things and see pretty pictures, go click down below.

I do some things in the Destiny community. I do my best to help distribute cards to the needy through Kingwood Hobbies. I help moderate some of the places online that we all gather. I record some inane ramblings with my buddies on the Diggity Destiny podcast. Occasionally, I even get to play the game. I used to play all the time, but events of the last year or so have conspired to prevent me from playing much more than the casual Wednesday night with the boys here in Houston. The lack of practice has definitely shown the few times I tried to raise a ruckus in the EG Thursday night tournaments. Decks I thought were monsters get crushed. Moves I made that seem reasonable at the time turn out to be the exact wrong thing mere moments later. I was never great, but I was at least passable. I am no longer passable.

There was one moment, though. One Thursday night where the team I dreamed up did some damage. I strolled into the EG Thursday Night tournament with this off-the-wall deck that had been making folks miserable here locally, and it did exactly what I wanted it to do. It took your stuff, made it mine, and then beat you about the face and neck with it. My pirates were frickin’ glorious. 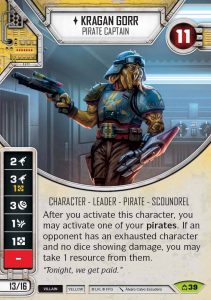 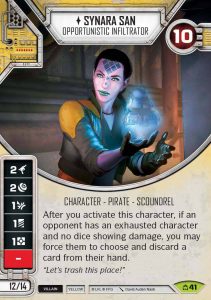 I don’t remember what I beat or who I played. I just remember that giggly feeling of sitting atop piles of ill-gotten resources. Little cardboard tokens glittering as they ran through my fingers like golden coins I’d purloined from some hapless stranger. Spending my opponent’s money felt so much better than spending the measly two bucks the game’s communist economy gave me that round. Fat supports hit the table, one after the other, and pummeled my opponents into oblivion. Giant events shot out of my hand like lightning bolts from Zeus, swatting down anything my opponents tried to do. I had all of the money, yours and mine. I spent it all. I was victorious.

That was it, though. There was no more glory after that night. Pirates were wonderful and magnificent, but I’d completely spent what the deck could do. There are about six pirate cards in Destiny and I’d used them all. There was no room for innovation or tweaking or evolving the deck. It was one shot, and it was spent.

Until now. With the spoiling of Sound the Horn, Redemption reveals a theme of at least some level of adding cards to previous archetypes. Creating a card like Sound the Horn gives us all a chance to view things we experienced in the past with fresh eyes. Maybe a chance to take an old favorite and make it more than it was. It turns out that Ewoks aren’t the only old archetype getting some new love. We gettin’ new pirates, ya’ll. 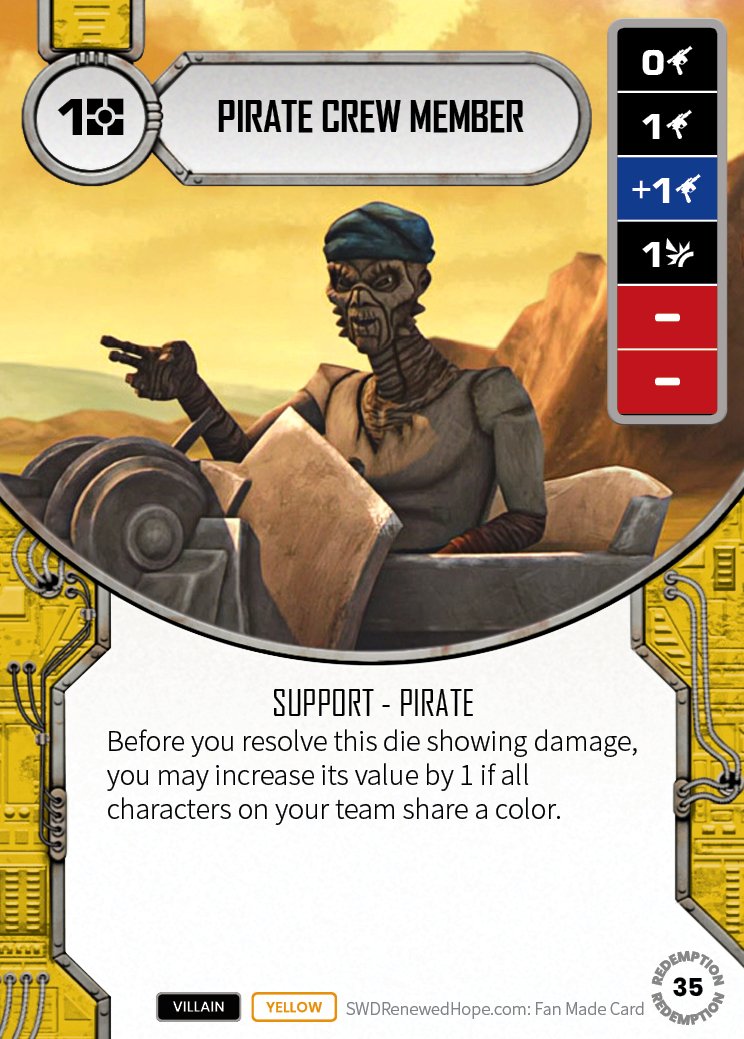 As someone who has had an interest in game design for most of my life, Mark Rosewater (of Magic: The Gathering fame) has been someone I’ve listened to for a very long time. He has a weekly column over there called Making Magic that has given me tremendous insight into just what goes into making games players love to play. Part of this Master’s level course in game theory and design over the years has been identifying the different ways that it’s possible to go about the process. There is what’s called the bottom-up process where you start with the nuts and bolts of a card (what does it cost? what does the card do?) and then slap a theme on top to give it some flavor for the kids to play with. This is how a lot of your more competitive cards get made. A designer somewhere sees a hole in the landscape of the game and makes a card to fit. It’s carefully tuned for maximum efficiency. 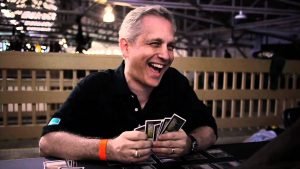 What I’ve discovered about myself in my brief time as a designer is that this is not me at all. I can do that work, but it’s not what brings me the greatest joy in making new cards. I’m what’s called a top-down designer. I am much more interested in the narrative the game puts on for the players than I am in the nuts and bolts and numbers of efficiency-izing cards. The people that can do that are very important, but that’s just not me. During Empire, as Blizzard Force relentlessly advances on Echo Base, I can put myself in the shoes of the Rebel forces and feel the hopeless panic as I scramble to hold on just long enough for others to evacuate. Successfully conveying that emotion into the game mechanics of Destiny is where I find joy.

One of the difficulties with this approach is the Star Wars lore itself. There’s just so much of it! So many books, movies, shows, comics, and such that even I, the power geek Star Wars nerd that all my non-gamer friends and family assume know it all, am missing huge swaths of knowledge. When Doctor Aphra came out, I had a huge ‘wtf’ moment and then had to go track down her graphic novels and immerse myself in her story.

One of the large pieces of lore that I’ve missed has been the Clone Wars. While I’ve known about the show and movie in the past, it’s never been something I felt compelled to consume until I started seeing Destiny cards refer to characters and places I was completely unfamiliar with. As such, I’ve started down the long path of learning about Rex and Cody and Good Anakin and Nute and such.

One of the characters I’ve recently become aware of is Ziro Desilijic Tiure, more commonly known as Ziro the Hutt. We’ve always known about the Hutts as galactic crime lords, but the breadth of their society and individuals, at least as far as I’m aware, has not been much explored beyond Jabba. Ziro entered canon in 2008 in the Clone Wars movie as another Hutt crime lord involved in the seedy underbelly Coruscant’s power structure. Massive shenanigans involving kidnapping, backstabbing, and attempted nepoticide ensue as we’re taken on a journey through organized crime in the Star Wars universe. Ziro’s character arc is not long (afaik so far, I haven’t finished Clone Wars yet), but it hints at so many more stories that exist just below the surface of civilized life on Coruscant.

While Ziro is not my card, I am eager to get him on the table and experience his designer’s retelling of this power struggle in the Hutt Cartel. 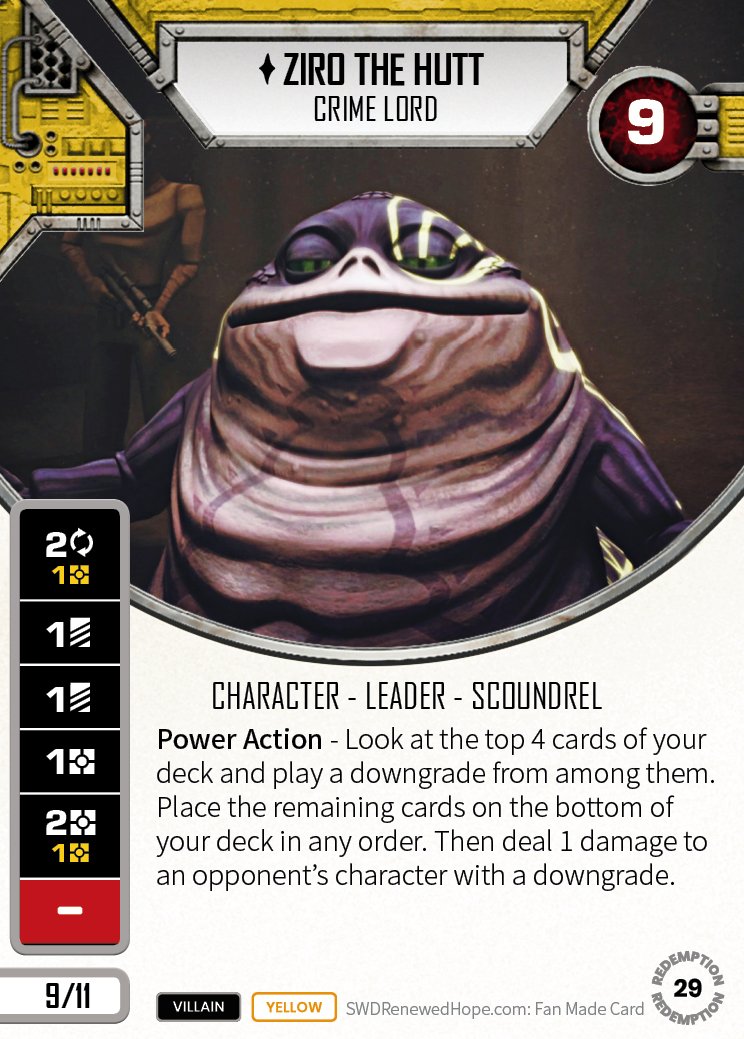 There’s one problem (and literally the only one) I’ve always had with the structure of Destiny. Cards and dice? Amazing idea. You-go-I-go to avoid long turns and boring players? Stroke of genius! Refill your entire hand at the beginning of each round? Capital idea! Who doesn’t love drawing cards? There’s one thing that didn’t work, though, and now we’re stuck with it forever. The resources. Don’t get me wrong, I like the idea of how you get, accumulate, and spend resources. I’m a big fan of how they completely side-stepped the typical bandaid fixes for Magic’s mana screw/flood problems

My problem is that I don’t think FFG fiddled the knob perfectly on exactly how many resources you get every turn (as well as everything that extends from that, like a 2-cost card taking an entire turn’s resources). I just don’t think two resources per turn allows enough granularity to properly cost all the different effects the game has. The range of power on what a single resource can do varies wildly from card to card and ability to ability. Right now, in high-level play, pay damage sides are essentially blank because resolving a single die usually costs fully half of your Round’s resources. Resolving a resource side on a die is either ‘fine’ or ‘ZOMG ALL THE RESOURCES!”. It’s just really hard to pin down what one resource actually means. In what world does it make sense that these two cards cost exactly the same? 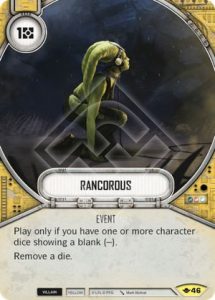 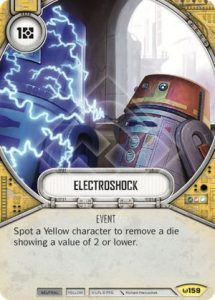 How much more awesome would it be if we could pay half a resource for that pay side? What sort of added nuance would we have if you could position events at 0, 0.5, 1, 1.5, 2, and so on? Now, we cannot have half resources, but what could have been done is double everything. In that world, we now get four resources per turn. Things that cost 2 would cost 4. Dice that resolve to net you a single resource would get you 2. but you could also have things that cost both 1 and 3 resources as well. What does a 1 (half) resource piece of removal look like? Maybe it’s more conditional than a full resource piece of removal? Who knows, but I think that is the only issue that keeps this game from being perfect.

Alas, we don’t live in that world. We live in this one with all of its ‘nearly theres’ and ‘almosts’. While we live in this imperfect world with varying power levels at similar resource costs, we might as well abuse that knowledge for fun and profit by taking advantage of overpowered things. One of the best places to mine for overpowered things is at the 0-cost. What things can we do that cost a card and an action? Some 0-cost cards, like As One, are highly niche cards that rarely see play even in the deck they were designed for. Some, like Truce, are defining staples that carry some bonus tacked onto a drawback. If you can mitigate that drawback, you just get the bonus for free. These are the cards we like to see. These are the cards that reward us for being clever. If only ARH would make more of these cards… 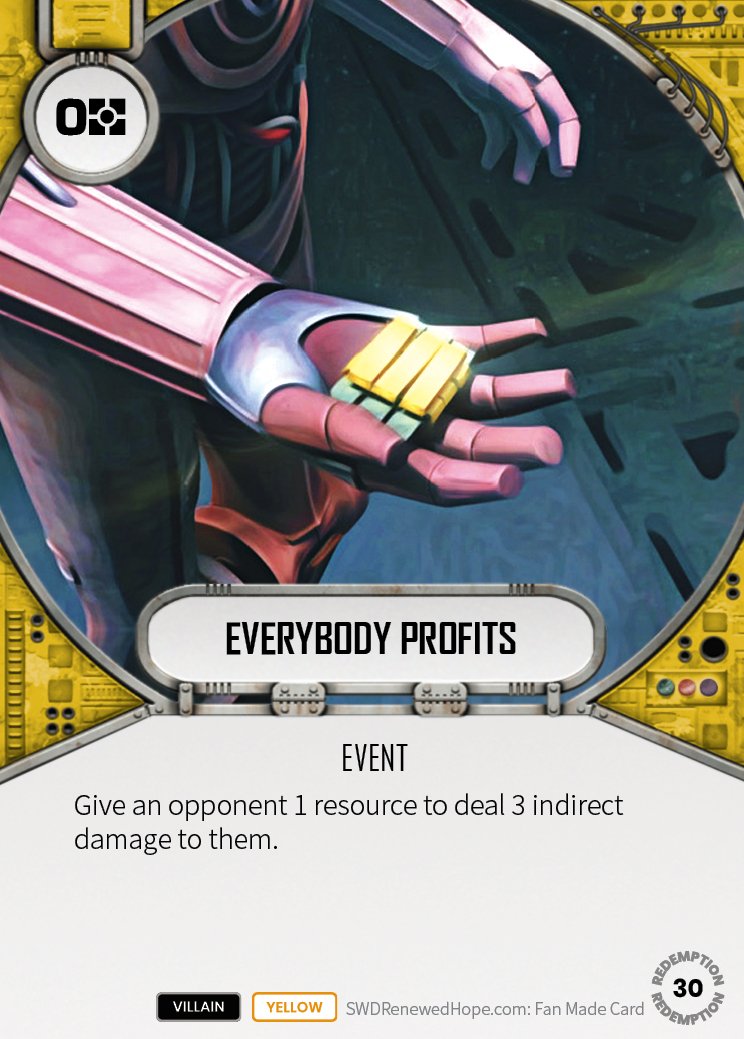